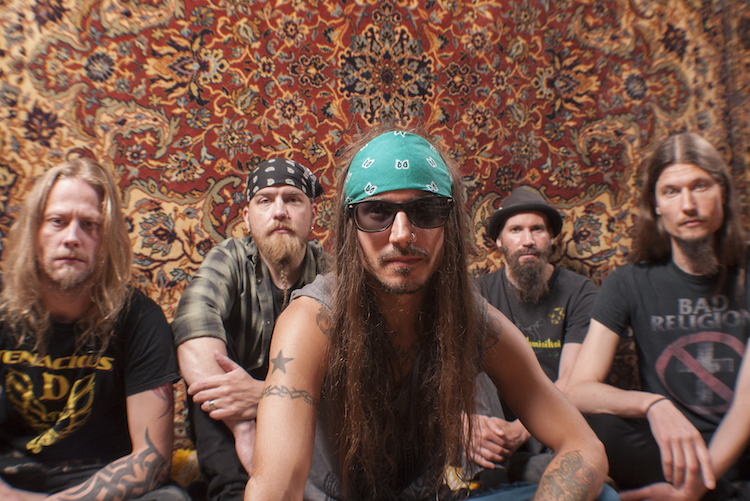 Taking it easy seems to be surprisingly hard. If it was easy, no one would need all the self-help books, mindfullness classes or lifestyle gurus. No one would need alcohol, drugs or TV. Mental health issues wouldn’t be everyday headlines.

We all strive for a mellow head and forget that it’s all about not striving. Sometimes we reach a moment of clarity right before we are thrown in turbulence again. And just when we want to drown in bitterness, some strange strike of luck hits us in the face.

”This is an album about how hard it is to take it easy in this roller-coaster called life”, says Egokills drummer Vilho Rajala about the band’s second album Mellowhead.

Egokills, the metal loving hippies from Tampere, Finland, are finally back after the debut album Creation. The sophomore effort Mellowhead contains eight diverse tracks, each with its own distinct character. The music varies from sludgy boogie riffs and full-on double-bass metal to sensible melodic rock – everything played by humans, not machines.

”This album is a lot more personal and more melodic than the debut. And it contains eight songs because no more is needed”, smiles vocalist Janne Selo.

”There is an actual band actually playing on this album. There are drums, bass, two guitars and Janne’s voice on top. It’s a rare thing these days”, Rajala continues.

The lyrical themes deal with both sides of life. The album is filled with determination, unity, optimism and eager expectation, but also addiction, stress, disappointment and loss.

The writing process was a long one.

”We have high internal standards for the music we let out. We want to breathe life into every song instead of making a dozen very similar songs for an album. And we write together. This takes time”, Rajala says.

To make sure that the album would sound like the band, Egokills teamed up with Miitri Aaltonen, one of Finland’s best known rock/metal producers. Aaltonen has been working with big Finnish names such as Mokoma, Stam1na and Viikate. He also plays guitar in Kotiteollisuus, one of Finland’s most prominent rock bands.

”Working with Miitri was laid-back but efficient. We worked intensely for eight or nine hours a day, but somehow the atmosphere was easy and relaxed. Eventually Miitri squeezed the best performances out from us and was able to make the album become reality”, Selo describes.

The year 2018 will see Egokills doing all the shows possible. The album release party takes place in the bands home town Tampere on May 10th.

”We are constantly looking for touring chances in Europe. We will get there, sooner or later”, Rajala concludes.